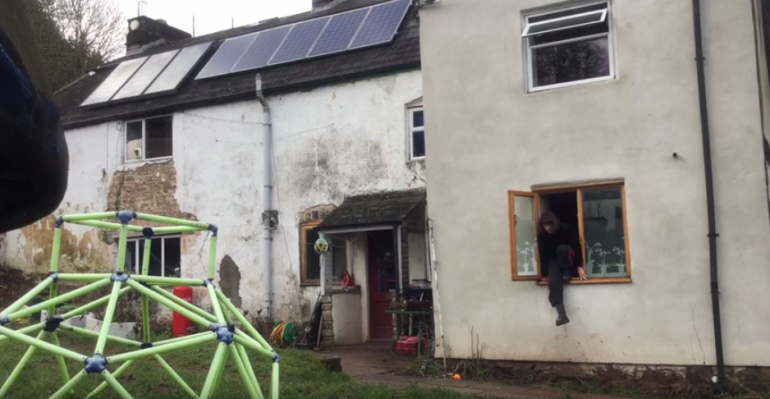 Exhibition
In and out
building circuits
Jenny Cashmore

In and Out (Building Circuits) | JENNY CASHMORE

In and Out (Building Circuits) is a series of walks creating different loops or circuits within the artists’ home. Each follows a different route passing through rooms, entering and exiting through doors and sometimes windows. The routes move both indoors and outdoors.

The circular walks are a way of subverting normal behaviour within the home; thinking about the architectural structures that form inside and outside spaces. These form our homes, our places of work, and our places of play. These are further sub-divided into different spaces designated for different things such as living, sleeping, bathing and cooking.  By walking through the building in a circular route no time is spent dwelling either in or out of these designated spaces. A circular act of walking has no destination other than that of the starting point, this can be further exploited by looping the film clips.

In and Out (Building Circuits) currently exists as a number of single channel films of the different routes.  Here are two from the series:

#walk #in #out #architecture #home

Jenny Cashmore is a British contemporary artist, currently living on the English/Welsh border. Her artistic practice is interested in our sense of place and relationship to place. Her recent works have begun to establish performative interventions within specific environments, in both public and private spaces. These focus on unexpected interactions, sometimes recreating absurd new relationships that reimagine and question the constructs of contemporary society.