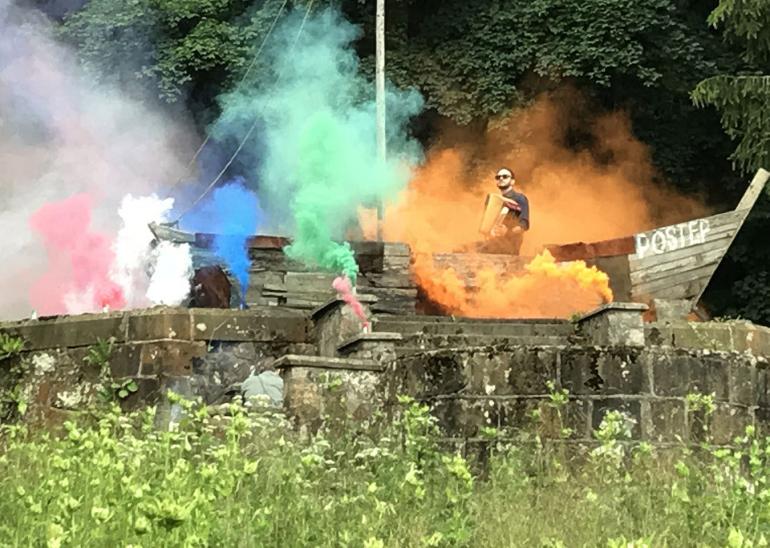 On July 23, 2017, Robert Bean and Barbara Lounder presented an annotated walk about breathing, the phenomenology of weather and the politics of climate change. The interactive artwork responded to the contingencies of the Sokołowsko sanatorium as a site of healing and conflict. Established by Hermann Brehmer in 1854, the sanatorium in Sokołowsko was the first centre in Europe for the climatic treatment of tuberculosis and was a significant precedent for other sanatoriums such as Davos, Switzerland, the site of “The Magic Mountain” by Thomas Mann. In addition to the walk, Bean and Lounder installed an exhibition of related images in two of the abandoned patient rooms at the sanatorium.

Participants experienced walking events that profiled the internal experience of breathing and the haptic sensation of weather through actions that utilize movement, performance, objects and sound. Allegorical references to the history of breathing, atmosphere, weather, and healing were incorporated into the collective experience of being at the site of the sanatorium. We adapted contemporary strategies of group mobility and psychogeography for this project. Theorized by Guy Debord in 1955, psychogeography is the spatial and literary practice of the Situationist International for mapping emotional, psychological and political meanings of urban spaces. During the walk, participants were given an Event Score to reference the events that were presented. The 90 minute walk covered a 2km distance through the elevated paths that surround the sanatorium.

We begin from the position that walking is a creative medium and methodology. The history and contemporary practice of walking assert that it is a means to generate thought and knowledge through embodied experience. An active awareness of walking and mobility as a diverse and creative act cultivates an opportunity to consider a deeper comprehension of embodiment, environment and space. Walking is a sensorial experience; the senses provide both distil and proximal relationships to the world that inform our understanding of place.

The ubiquity of technologically mediated experience influences the experience of knowledge generation gained through walking. Pedestrians are networked into multimodal experiences while walking and interacting with mobile devices. When the experience of walking is mediated by mobile technologies, the creation of specific forms of data such as image dissemination, texting and GPS tracks leads to more composite questions such as: how does the “stratification” of mobile experience generate new historical narratives?

Being-in-the-Breathable is a term that the author Peter Sloterdijk uses to describe how the atmosphere and environment were made explicit by the use of gas warfare during the first and second world wars. The deployment of “atmoterror” weaponized the atmosphere as an environment and continues to be utilized in contemporary warfare. Atmoterrorism is pivotal to understanding the projected consequences of global climate change. The atmosphere, the last common space that people share, lost its innocence when it was used as an environmental weapon. 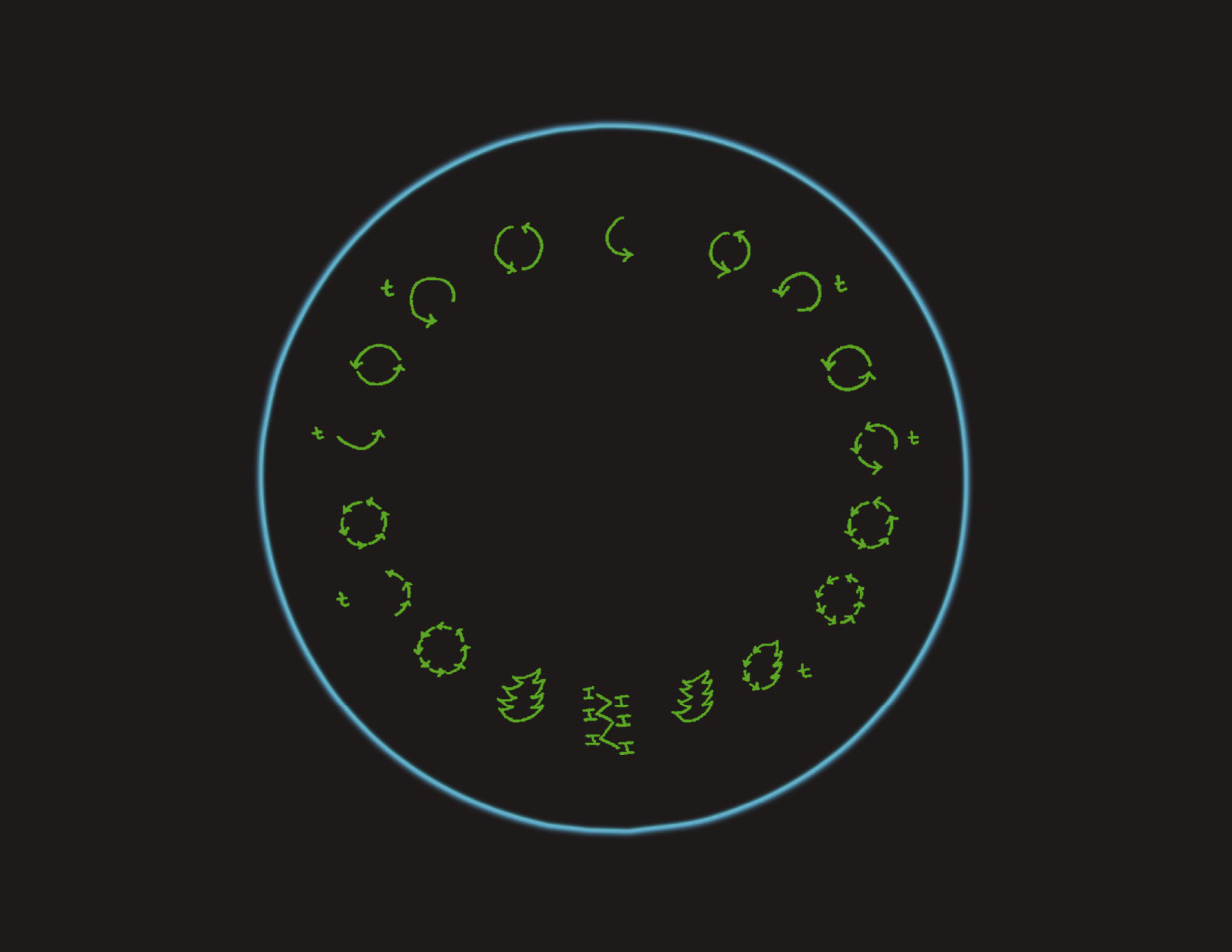 The graphic vocal score for “Circular Song” by Joan La Barbara (1975) surrounded by the atmosphere of the Earth. The “Circular Song” was performed on accordion at the end of the walk. 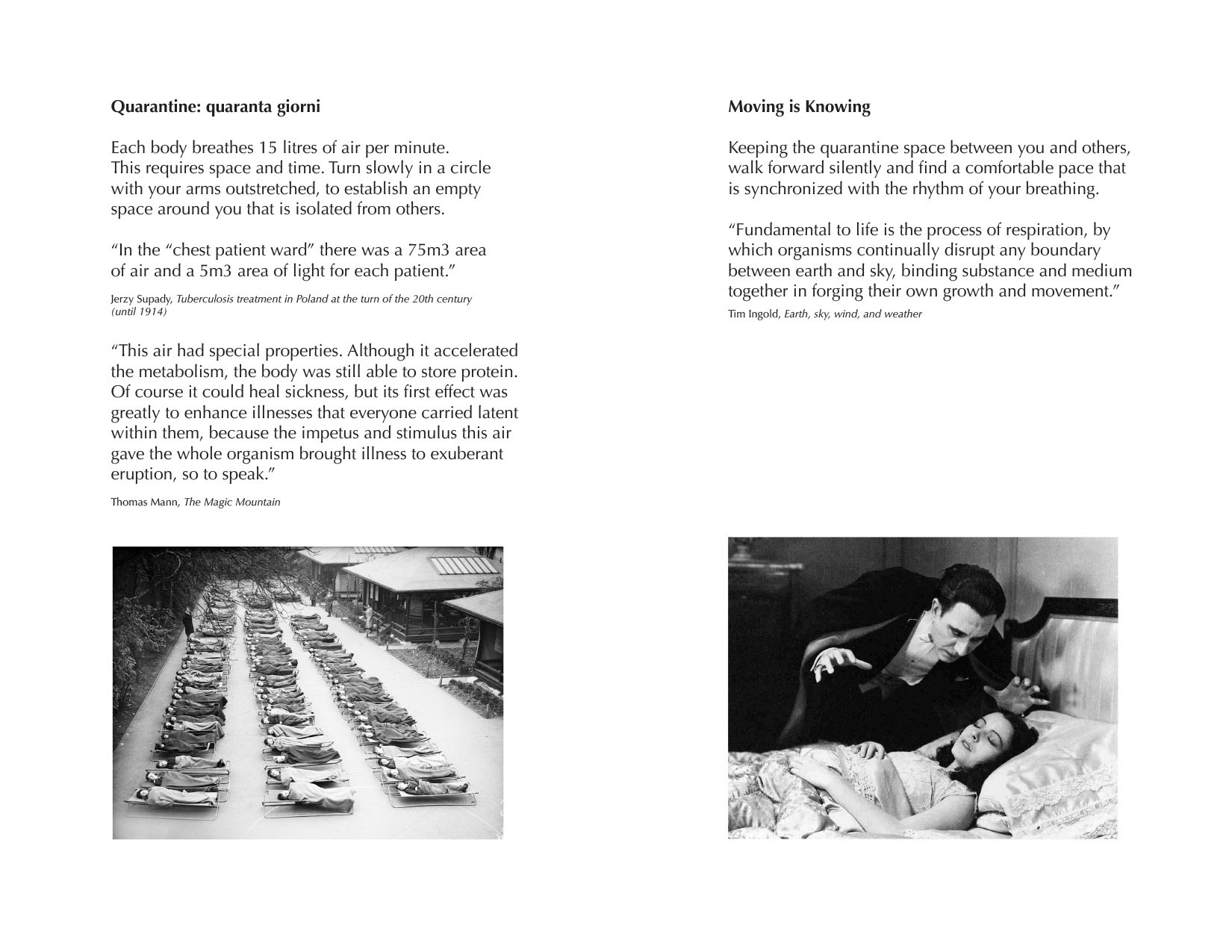 Quarantine Space and Moving is Knowing 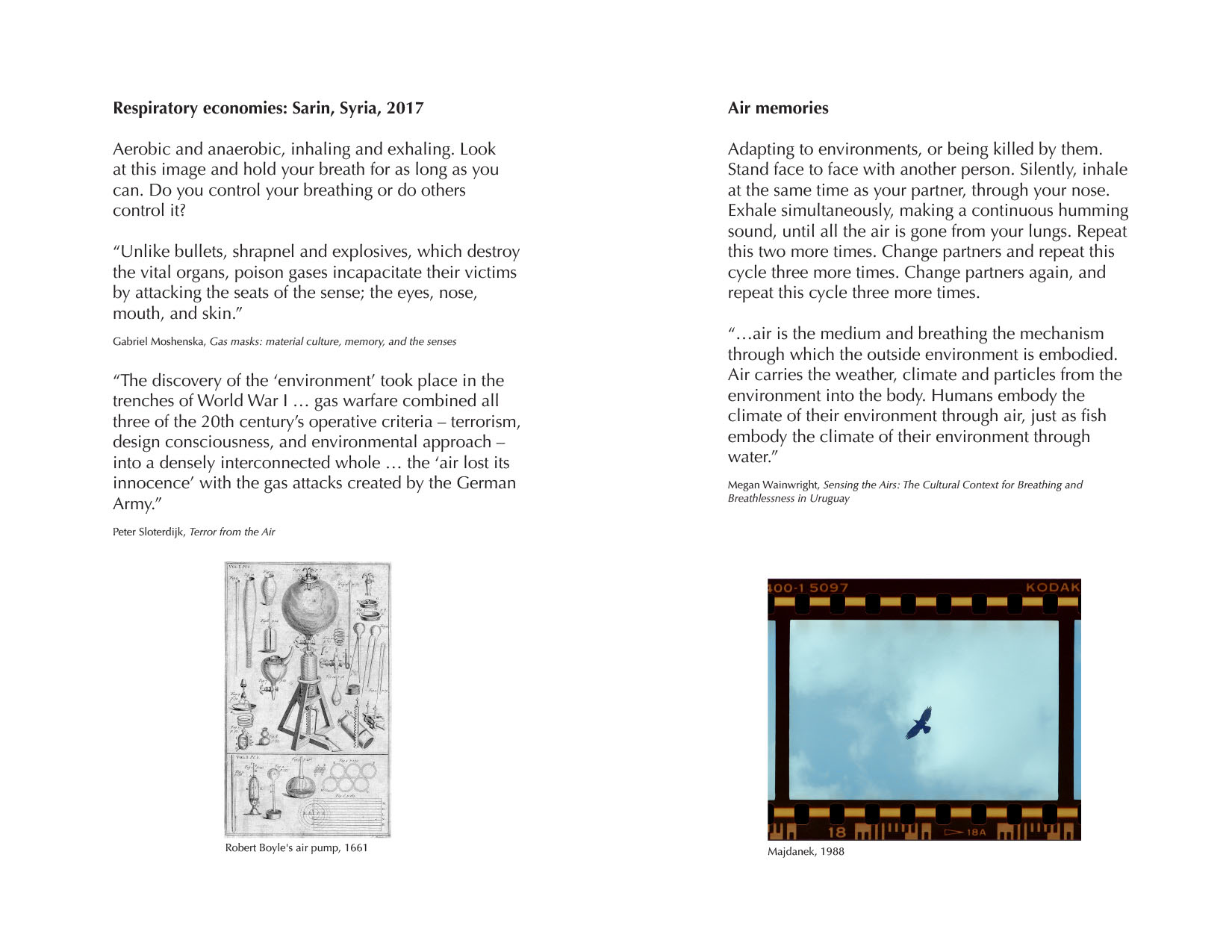 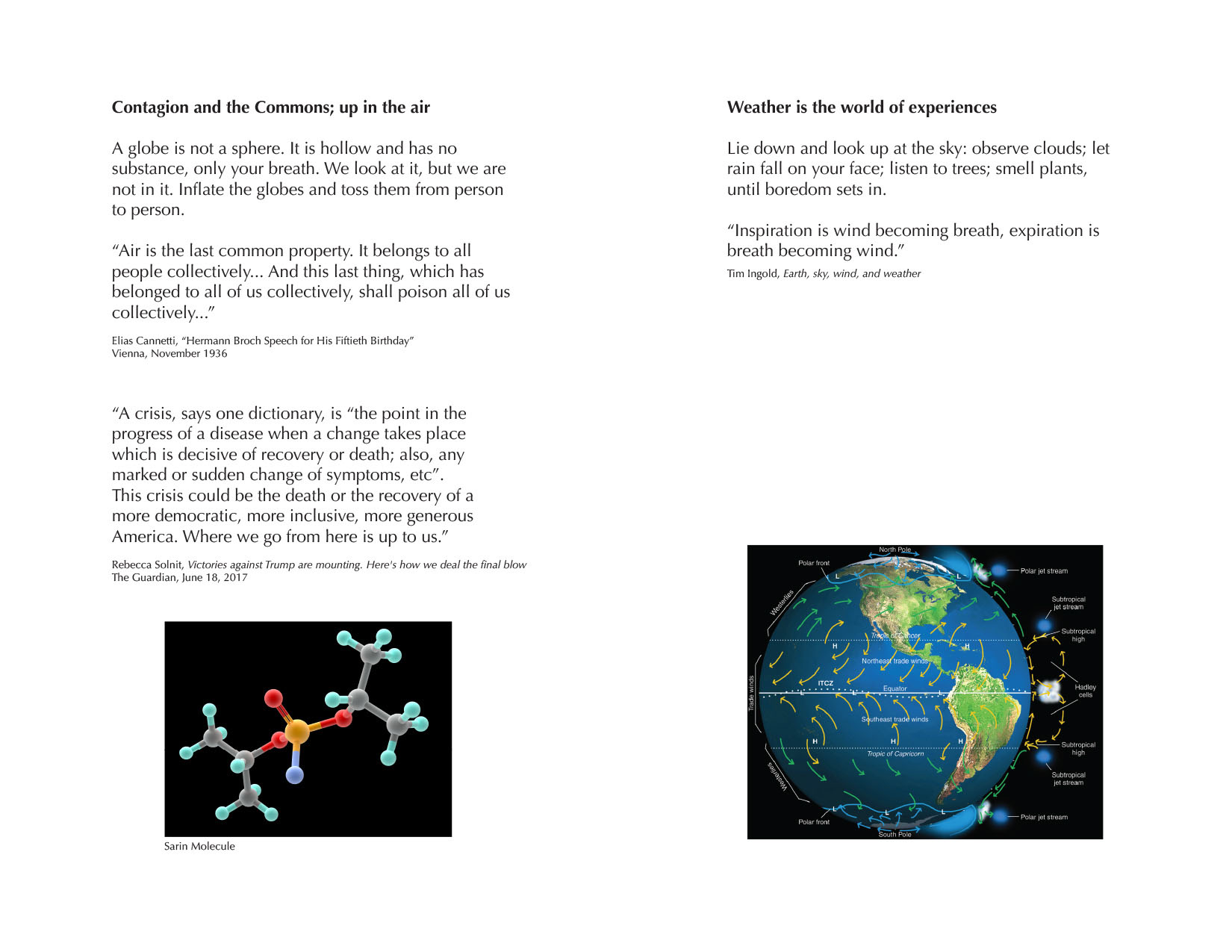 Contagion and the Commons; up in the air and Weather is the World of Experiences 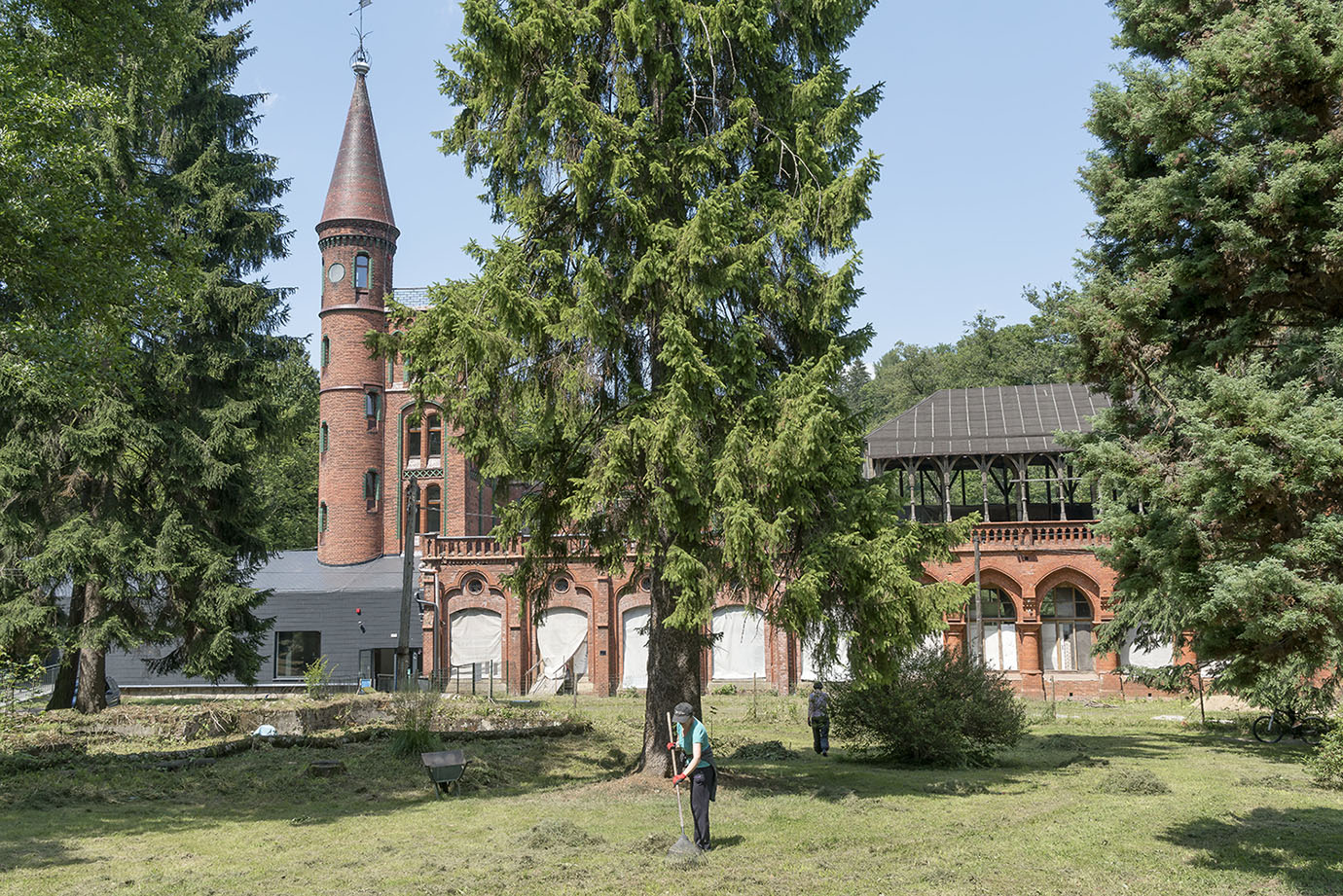 The Sanatorium in Sokołowsko, Poland. Current Site of In Situ Contemporary Art Foundation. 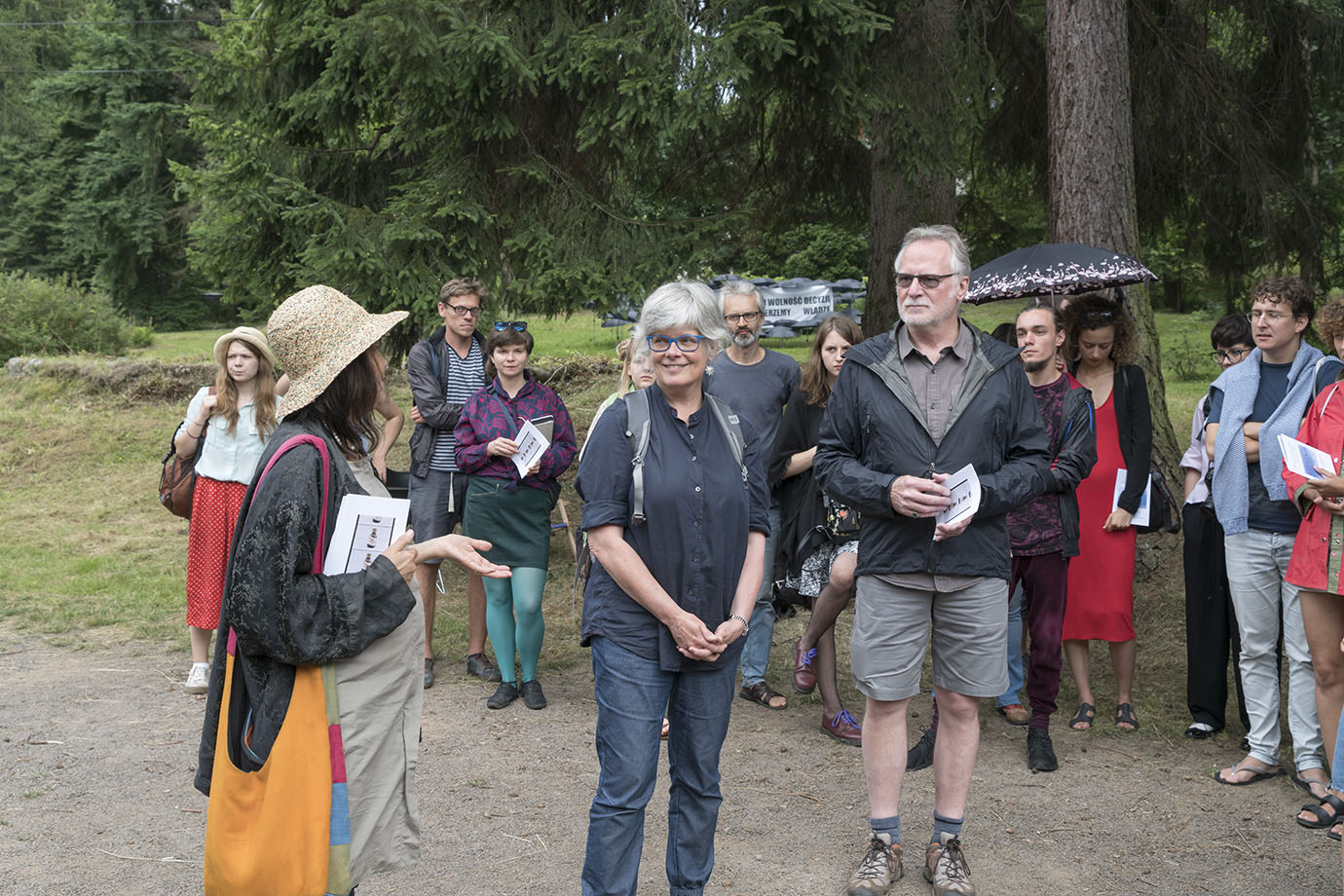 Curator Malgorzata Sady welcomes the artists and the participants 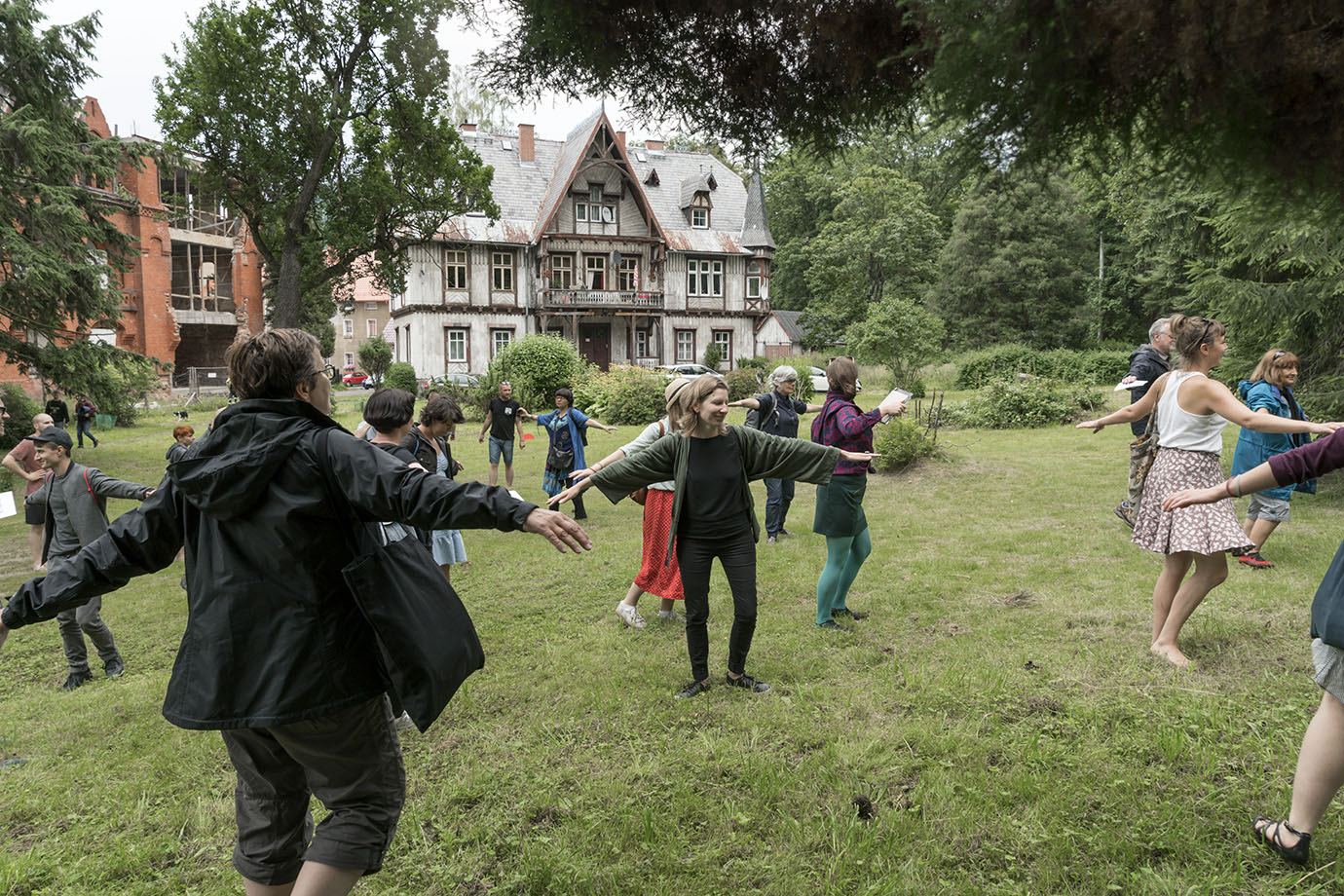 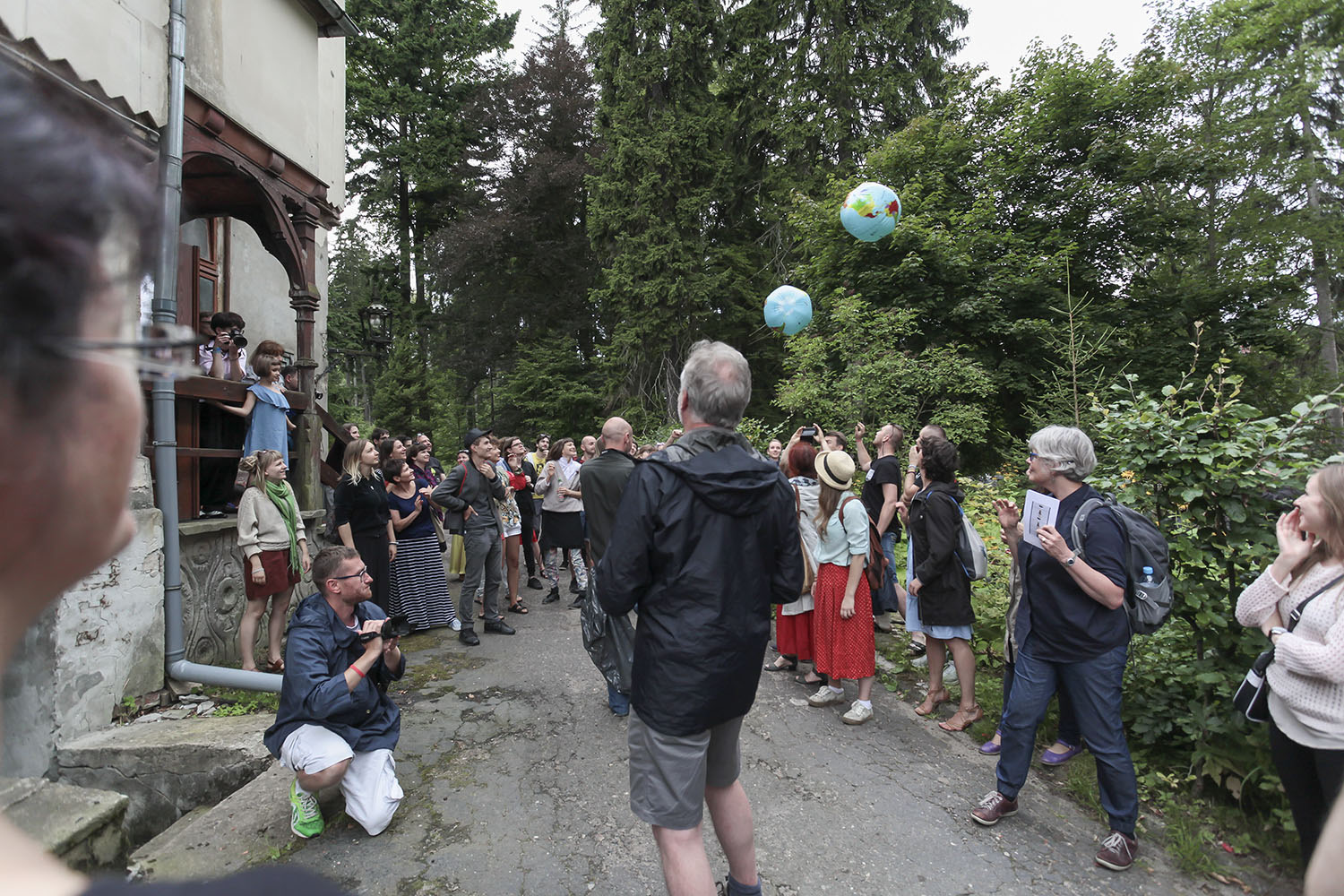 Performing Contagion and the Commons; up in the air 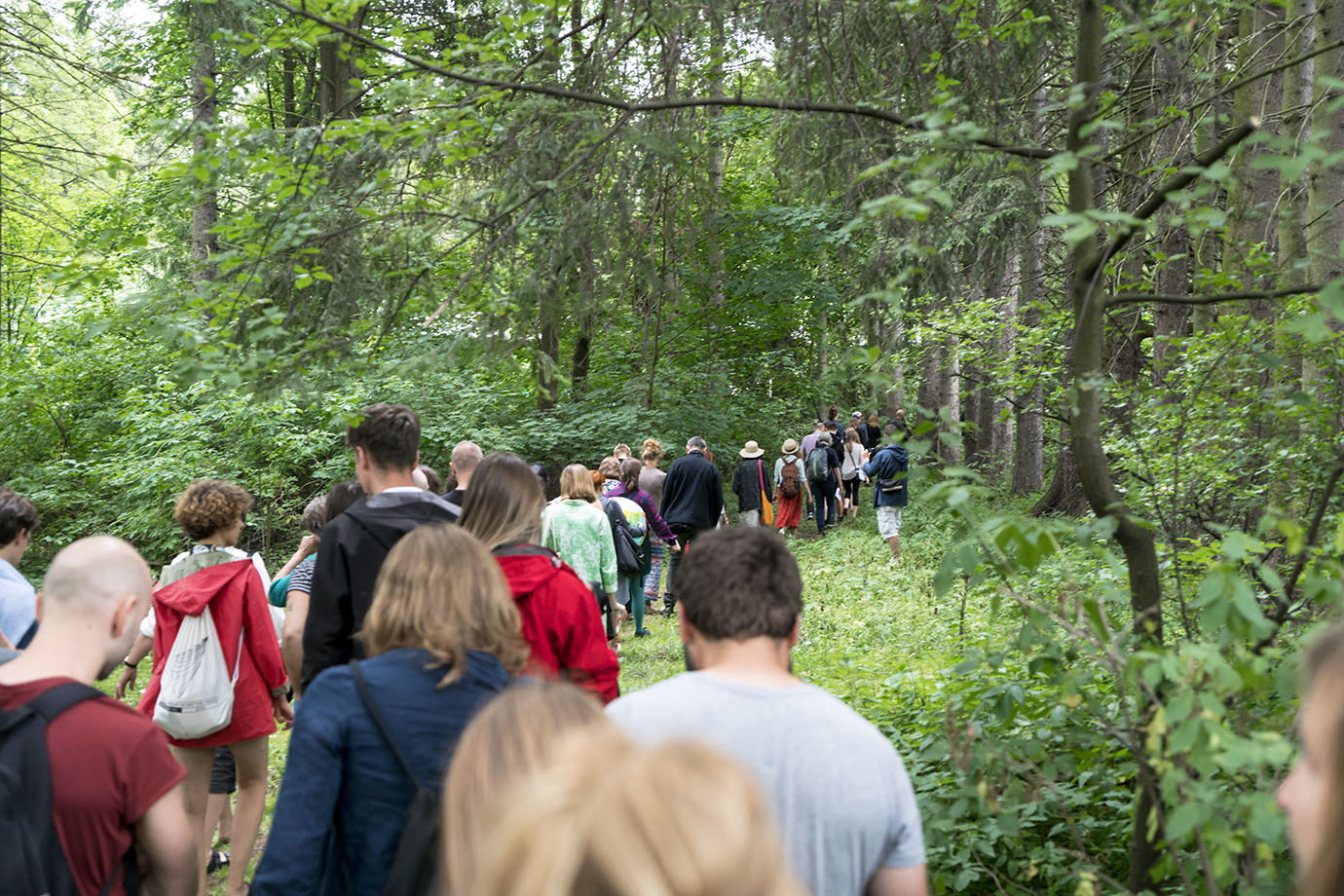 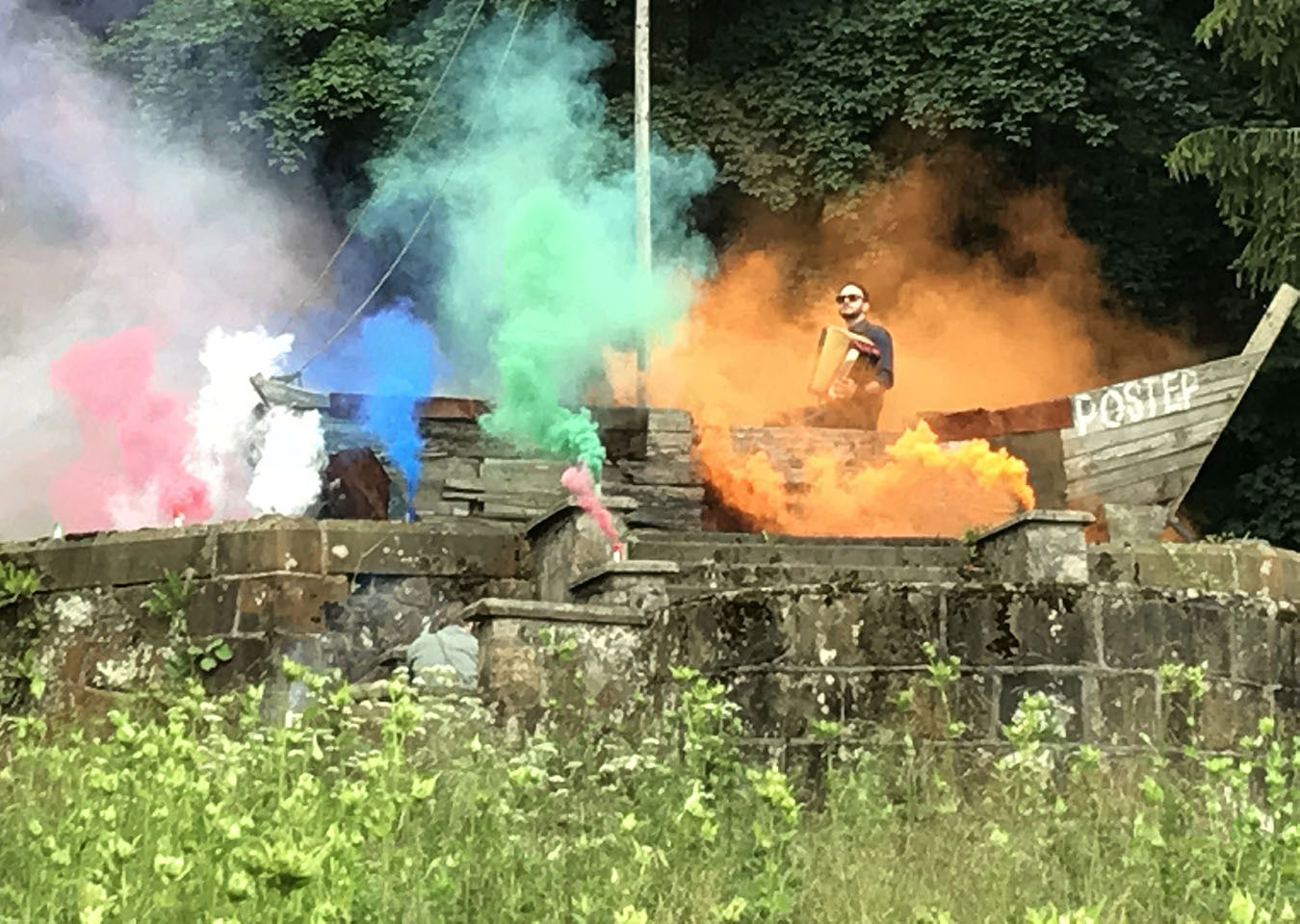 End of the walk. Performance of Joan La Barbara’s “Circular Song” on accordion by Marek Kocon

Robert Bean and Barbara Lounder are Canadian artists and lecturers at NSCAD University (Nova Scotia College of Art and Design). In addition to their respective careers as artists and writers, Bean and Lounder have completed numerous collaborative projects that explore walking as an artistic medium. They have presented their work in exhibitions and other venues across Canada, the USA, Poland, New Zealand, Germany and Bulgaria. Bean and Lounder are founding members of Narratives in Space + Time Society, an interdisciplinary group working on projects involving walking and mobile media. From 2014-2018, NiS+TS presented urban walking events surveying the contemporary debris field of the Halifax Explosion (1917). The Halifax Explosion was the largest human-made explosion prior to the use of nuclear weapons in Hiroshima and Nagasaki.

Links to the projects of Narratives in Space + Time Society: