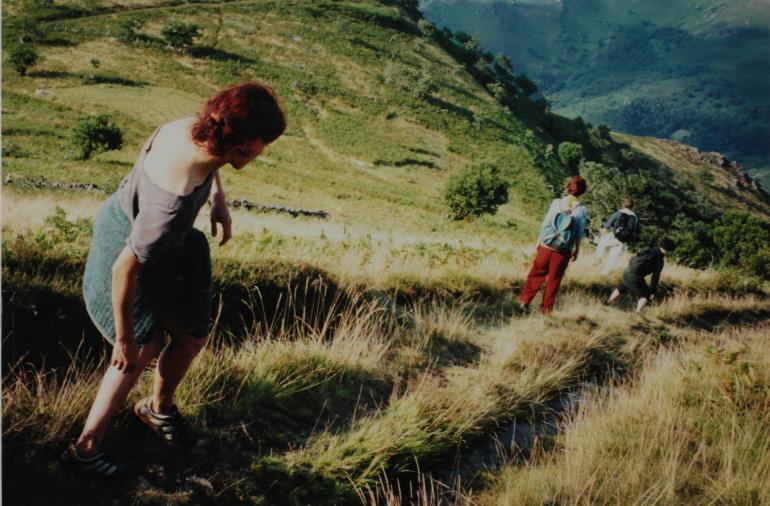 WALKING: an ordinary activity, a simple means of transport, of recreation, of performing a pilgrimage, of demonstrating..

For me, WALKING was the choice to practice a physical activity that crossed over with dance. Then, it became an artistic action in itself. The voyage taken in the year 2000 was a question of testing myself through several ways of walking, vagabonding, tracking and tracing. I was able to observe the effects of walking in various environments, the effects of landscape on my body and my thoughts as well as establish a relationship with studio-based dance research (symmetry, relation movement and space, anatomy, endurance, improvisation, relaxation in being in action, gathering images, rythms, appearing and disappearing)..) Reflections on the question of baggage and booty. I came back to an in-depth questioning relating to the notion of territory and the ability to reclaim it, the accumulation of impressions as creative necessity as well as the enrichment of experience understood as progression. I can say today that walking is a banal activity and nevertheless ideal for experiencing, exposing and communicating. In this I agree with Hamish Fulton who talks about "missing action" [1], a gratuitous action as well as a disappearing act. 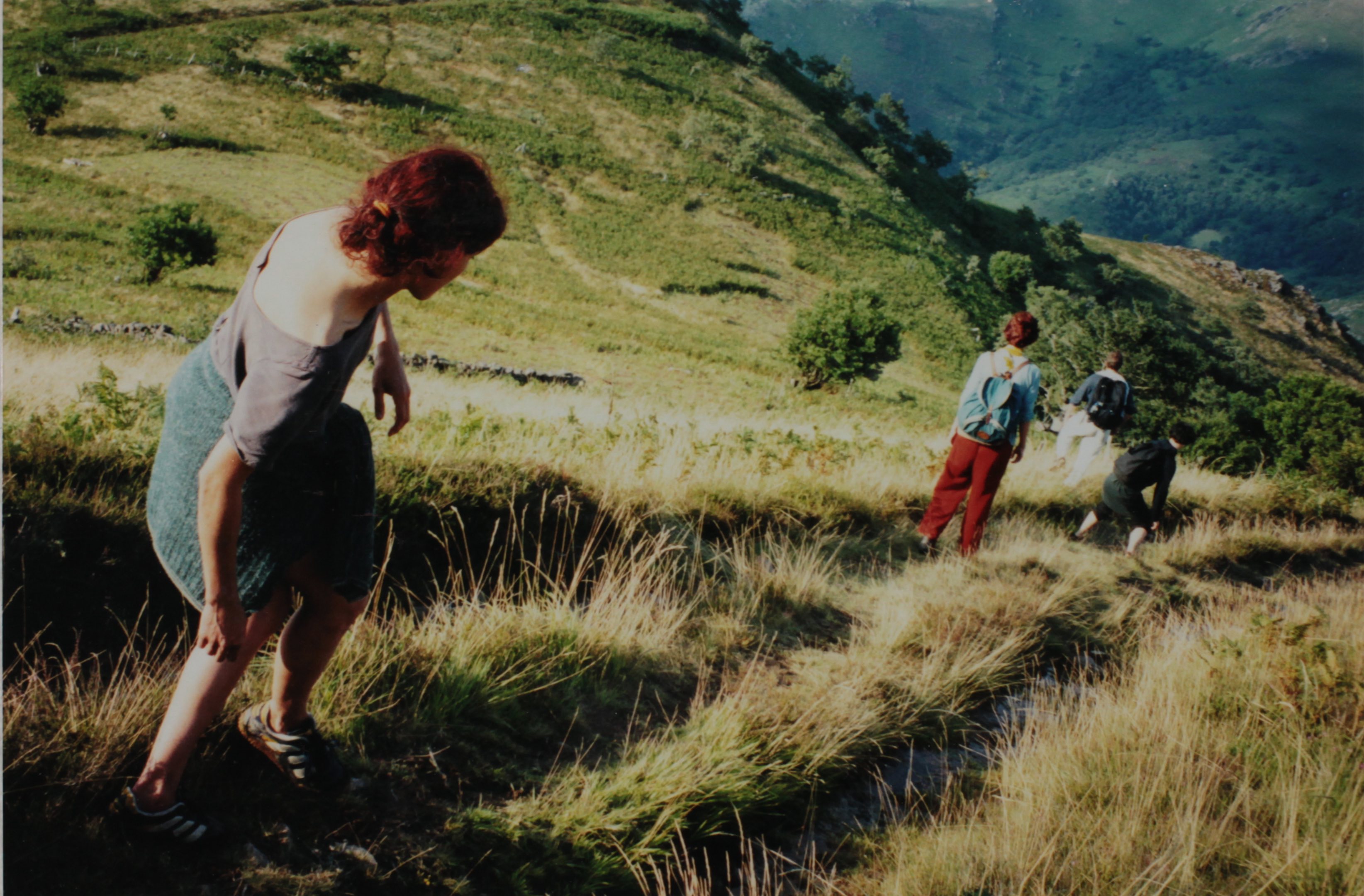 WALKING in 2000 and keeping a logbook: Recording the landscapes ("if the photos exist, it's because I was there." [1]), fragments of dance (I used a mirror to reflect on dance in landscape), notes, cognitive, poetic and philosophical. Practicing on various terrains (desert, mountains, islands, megacities ...), I moved either from a base or over long distances. This allowed me to develop a form of body work that can be practiced along the way or in the studio. A practice that has to do with the bone and muscle structures of the body, perceptions, sensations, combinations of movement around an axis. "To do a walk" [1], a notion that is both physical and geographical. 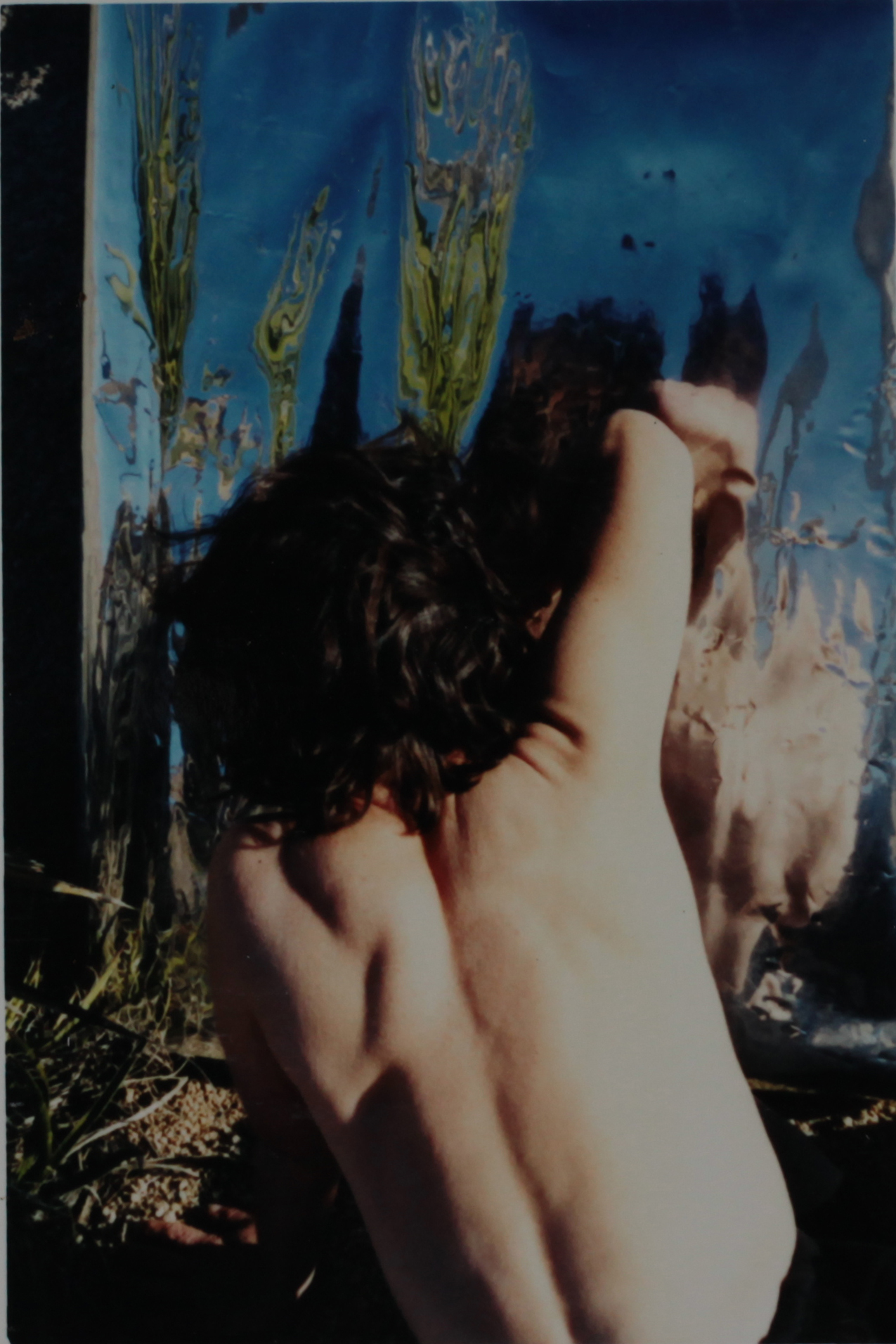 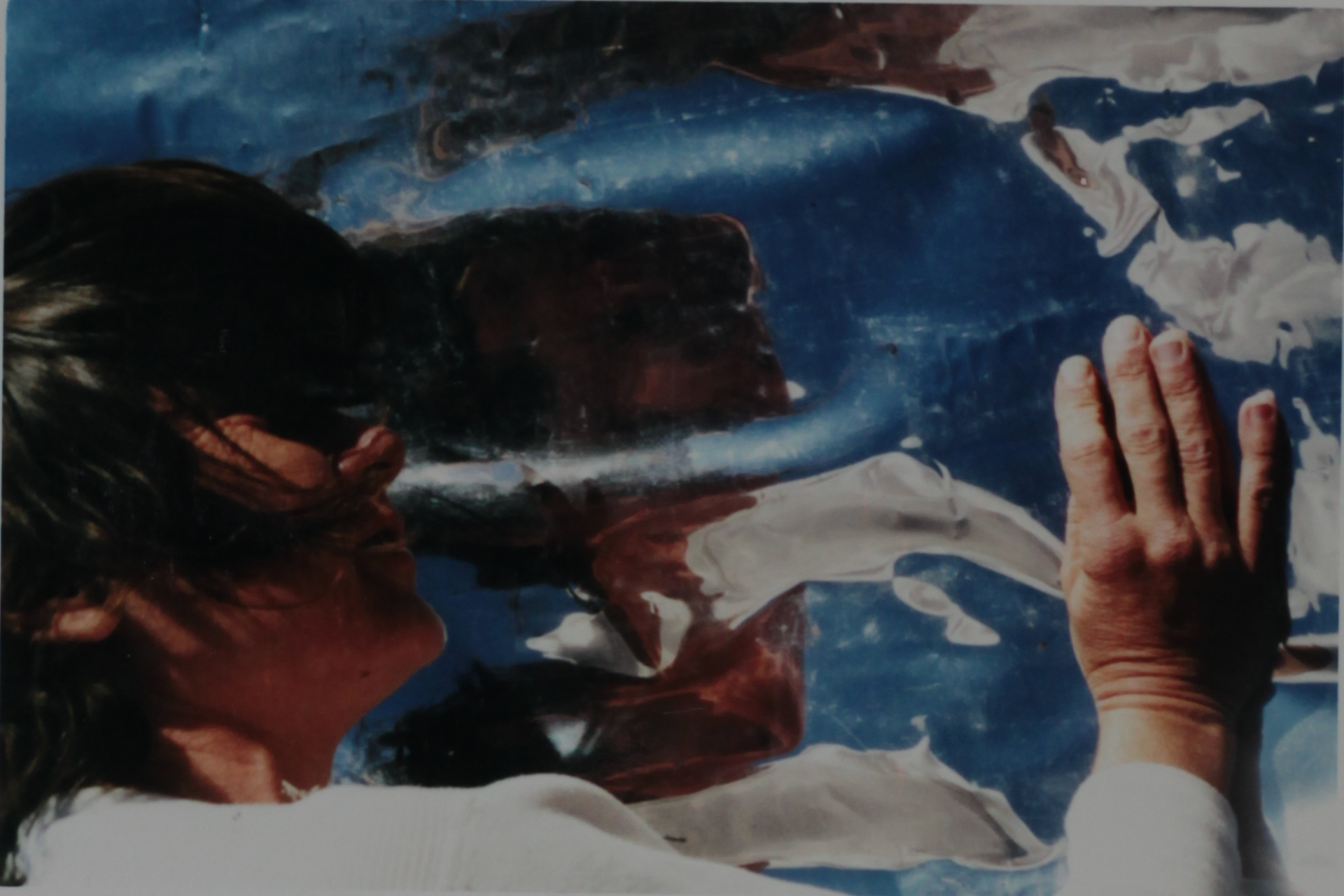 WALKING allows for vacuity, a beneficial element at any pre-creative stage. For my part, it's a way of connecting with a bipedic mode of being that awakens in me a form of spontaneity. As I walk I feel the desire and the possibility of dancing. With discretion, I add an infinity of small gestures, micro movements, never tired of stepping over, circumventing, counting the rhythms.

While doing so, and while walking, I observe the landscape, I observe variations of a mathematical kind: I approach the steps that I take with another state of mind. I give myself arbitrary rules (45 minutes, one hundred paces), a kind of constraint that can become a game, and thus, I deflect my habitual relation to the experience of walking. This practice opened me to the realization that I was much more present to the moment, to the field, to the place in which I was.

It's a solitary act: no one experiences it in the same way, even on a shared journey. To lose oneself is a possibility. It never lasts. By the way, walking is a good way to understand that everything passes, vanishes.

There is a difference between walking to manifest something, to achieve something or go somewhere and walking as an act in itself, without a goal or result. Achieving an artistic form other than walking may occur later. "Being" is surely more difficult than "doing". [2] 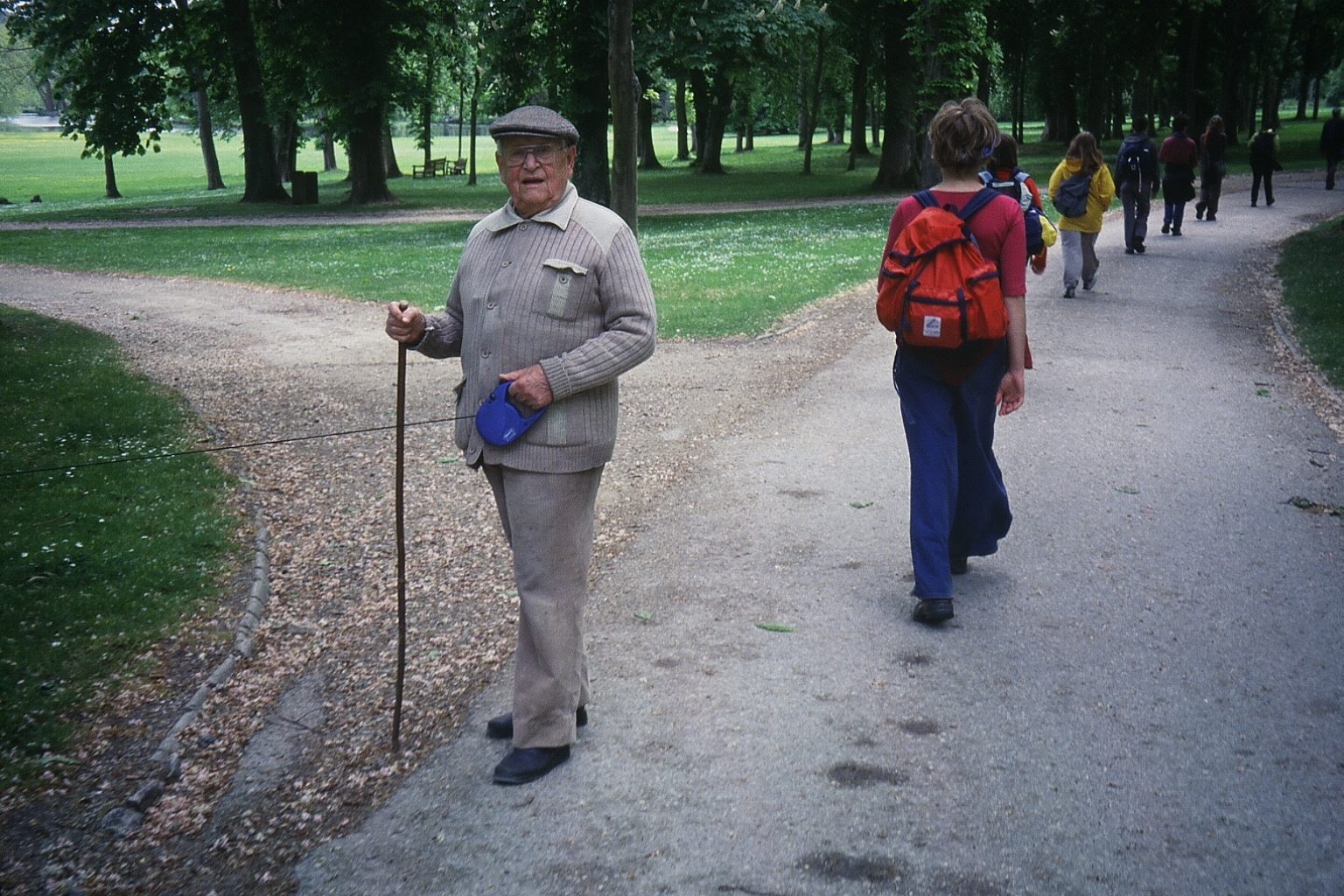 WALKING in 2000 gave me the opportunity to exchange and confront various points of view. In a way, one writes one’s text according to one’s own history, one’s own knowledge. The voyage, of course, expands all of that. A way of moving and of being moved, of being dis-placed. There remains the question of where to walk. We are often attracted to specific places.

In 2001, I walked roads and paths with the aim of not eliminating places that did not appeal to me. This is how I crossed countries at war (and post war), cities (Subotica, Szeged, Marseille) witnessing again, the mutual impact “Body / Landscape” [2]. To perform the walk preferably off the beaten track, to go to the discovery of what is being lived there. Doing nothing to the landscape (except removing the garbage) was the path that I took through places for the most part controlled and well ordered. To walk there produces in and of itself a number of thoughts and coincidences.

"Transforming does not mean compelling or upsetting, but rather understanding, accompanying or mentally integrating real-world data."

In 2001, we "walked and danced",[2] ignoring any idea of ​​"final production"[2] so as to not project ourselves out of the experience itself. This happened under the friendly gaze of the people we met. It gave rise to many meetings, exchanges during which we had the opportunity to share and gather new information. We can call this a STUDY IN THE FIELD OF COMMUNICATIVE VALUE.

Along the way, anonymously or not, gratuitous and demanding. It is not possible to wriggle here or there without having to take into account all aspects of what is happening in that place. 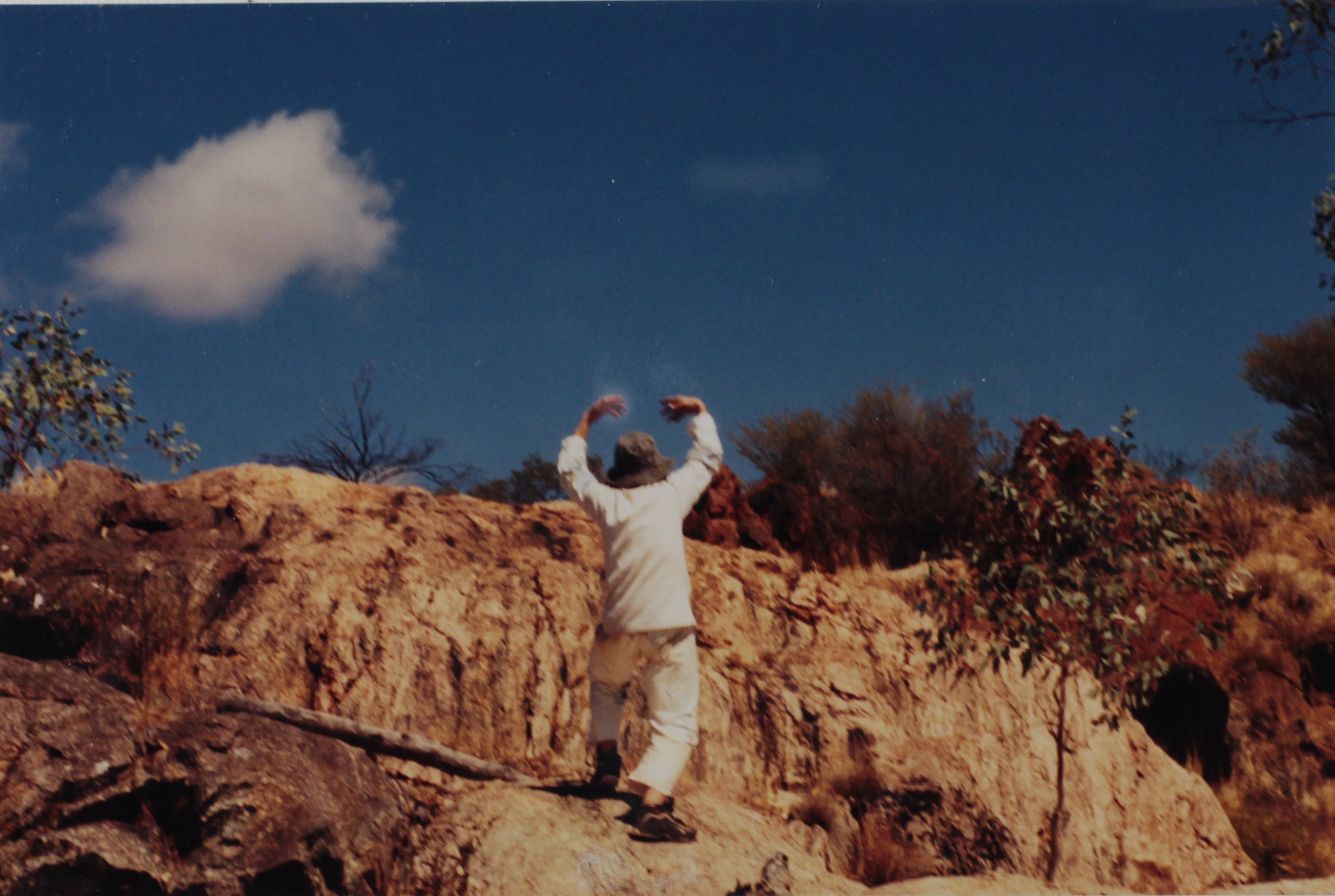 WALKING on the sidelines and yet in the world as it is. Art cannot be prefigured in advance. In my opinion, if the artist projects his expression of the world, towards the future, he evolves by instinct in her or his choices. Wanting to take advantage of an experience is missing the chance of discovering, of having something deposited; it’s comforting oneself in an opportunistic attitude. As artists, what career do we want to build, for which world, which public?

WALKING, whatever we think of it, is a neglected activity: it is practiced as a hobby, by the elderly, by a minority of "solitary walkers"[2]or, in many parts of the world, out of necessity. Can we not consider it as an act in its own right, a resolution between "being" and "doing"?[2] To position oneself as "gardeners of the earth" [2] , accounting for the state of the world.

"Walking, in an old definition, is like stepping on a material, on clay or kneading it by trampling it.” [4] 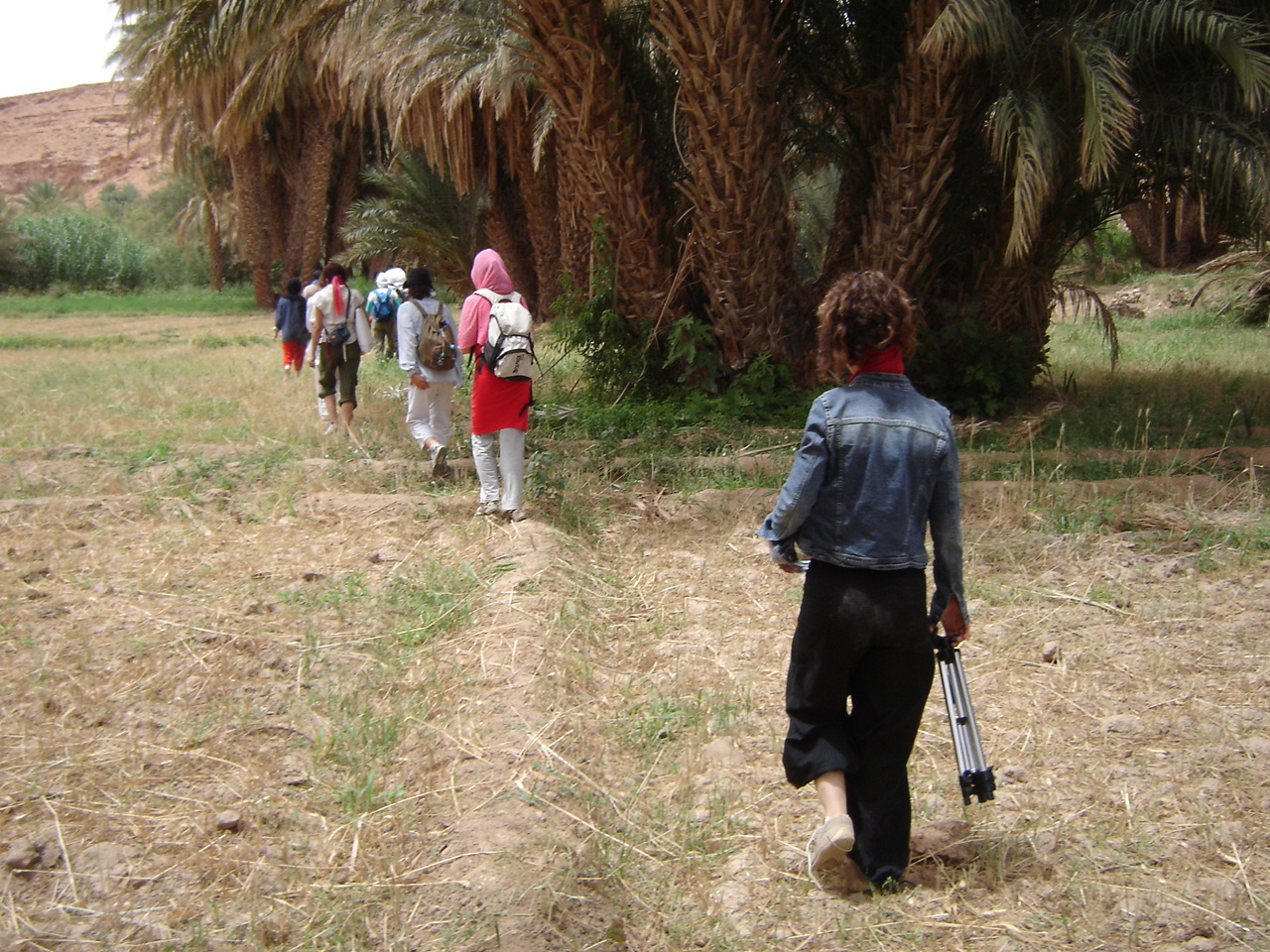 When I get back to the dance floor, the studio, it is easier to approach the here and now, dance improvisation, taking advantage of the instantaneity related to the voyage that has been taken. Trained to observe my bodily habits, while on the road, the deactivation process paradoxically generates a new kind of activation of the body. To risk a path which has not been traced on a body which, in any case, is never a blank page.

This year, the observation of ordinary bodies provides for me an inexhaustible compendium of suggestions from which to compose a multiple dancing body, a body with migrating contours. How many dancers who have spent so many years "making and creating forms" [2]come to improvisation to "undo" [2] precisely? The body that would escape constraints (age, social ..) is a Utopian body. A body not "shaped" [2] to dance or to perform another function is an object that can access chaos, by means of its internal rage and / or by applying oneself to find oneself in a temporality that is a priori useless. These have the virtue of highlighting the presence of the body, before it forms an image, an expression. A state before the dance could we say. The body becomes a conductor of forms. Drawing from outside world rhythms, structures, attitudes, is an exercise in itself. For me the dance must be free in expression and rich in investigation. To multiply oneself is both to evolve towards the outer world and its languages and to disintegrate oneself. Going from monolith to versatile. The term "being anchored", [2] in my opinion, relates to the definition of parameters for oneself, which allow an evaluation to take place and a framework to emerge. 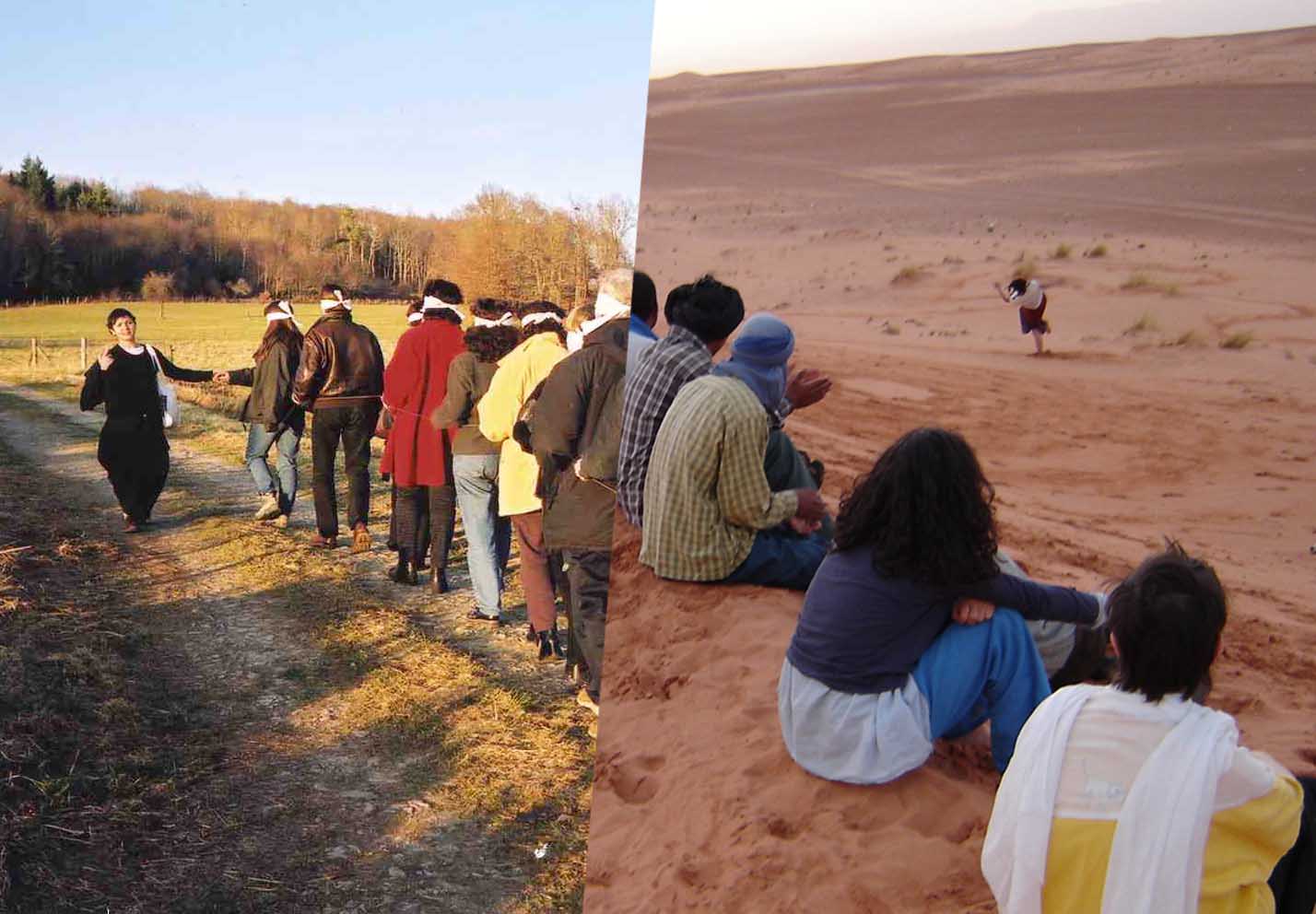 To formulate, to navigate outside of the frame, to take the measure, the cadence, the position, to take stock of places but also to open up, roam, survey are all characteristics inherent to my walks. Crossing the world, "rising up" [2] is a term, romantic, that comes obviously to mind but about which I also wonder. I prefer terms like "to clear a path"[3], "to navigate without instruments”[2],  "to graze the earth" [2], "to appear and to disappear"[2].

As for the destination, I know from experience that a route that has been taken can also be deviated at any moment. I prefer, if I am in a making process, to remain master of my choices, to comply with an observatory, decisive, circulatory movement. Inspecting the inside and the outside, during the walk, is knowing how to negotiate a coming and going, a chance to avoid fixity. I am looking for the moving body rather than the expressive body. A body which is shaped, chewed by objective thoughts. Walking is an excellent means of research, for me as a dancer, particularly when they happen "outside of the frame"[3], when they are intensive, ritualized walks. They give me space, time and movement, a trial of resistance, momentum, distance. There, I reach poetic spaces, abstracted both inside and outside myself. Walking also gives me access to saturated spaces, empty spaces. Inspire, exhale, binary rhythm, expandable.

Author Bio
In 1999 Christine Quoiraud, dancer and choreographer was awarded a Dance Research Bursary by french Government Ministery of Foreign Affairs, “bourse Villa Médicis Hors Les Murs”, for her research on «BODY/LANDSCAPE; WALK AND DANCE». In 2000, she traveled throughout the world (Japan, ex Yugoslavia, Spain, Californian desert, London, New Caledonia) testing various scales of walks by herself. She also conducted “Body/Landscape” workshops for dancers, during which she introduced the activity of walking as a training in itself (slow walking, backward walks, walking to get lost and so on). In 2001 she organized and conducted long distance walks as dance workshops focusing on improvisation. These included Walk Art c°, a month-long walk to Santiago/Spain, with a group of 12 dancers. The work was conducted in bivouac, no tent, no shelter. She has facilitated several projects in art schools as well as organised walking projects for large audiences in several dance festivals in France (Paris Quartier d’été, 2002 /3; Décadrges Reims, 2003, Dansem Marseille 2001 etc). In 2002 she co-led the project Walk art dance C° with Hamish Fulton (book released by Filigranes edition). Awarded by Cultural affairs in France in 2002, she walked through France for the project “Duodyptiquemarcheetdanse” with Julien Bruneau. In 2006 she joined the group STALKER in Rome for the project Metropolis. In 2011 she has been Recipient of a grant from Lauren Bon and the Metabolic Studio as recommended by the Chora Council in recognition of your inspiring work and practice in the arts. The Chora Council is made up of artists practicing in several different fields who, as part of their role on the Council, recommend funding opportunities to the Metabolic Studio, Los Angeles.