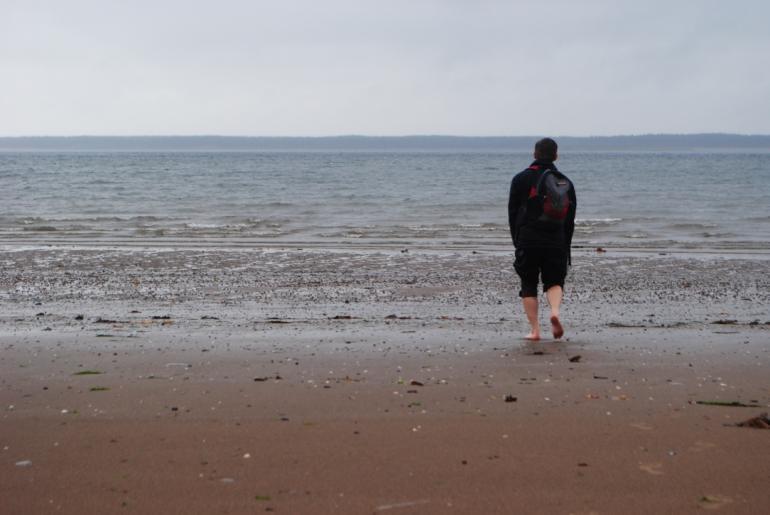 This essay deals with my own experience of walking as art.  ‘My Walking Life’, as I term this,  in a sense began in 2011.  In that year I undertook a series of walks in my then home city of Dundee, Scotland.  Since that time I have been involved or authored a number of walking projects, as artworks.  For the purpose of this piece I will however, stick with this first walk/work, which was entitled ‘Boundary’.

“To produce a relationship between different disciplines, it is necessary to place oneself on the [external] limits of one’s own discipline”. Enric Miralles(1)

I will talk now of ‘Boundary’ and boundaries. The aim or inspiration of the project was to look at the edge of my professional life as a landscape architect and my urge to make artwork in and about landscape. I recently read a piece around the etymological origins of the word landscape. Vittoria Di Palma writes that it ‘Signifies a defined or delimited area of territory’ with the ‘suffix “-scape”’, being ‘A Germanic term that denotes a bounded entity’(2). In a way I wanted to unbind my perception of landscape. My way of doing this was to take as a starting point the boundary of my home at the time, the Scottish city of Dundee. Walking the edge of the city was a way of examining my place, my town and its relationship with the ‘region’ to vaguely think here of Patrick Geddes. The act of walking allowed me to see anew and physically experience, mentally reflect and emotionally respond to place, my place, the city and the “Not City”. Though I have now left the city it was and remains important to me.

To put things in context, Dundee has just under 150,000 inhabitants. It was once a centre of industry but had been in decline for some time when I arrived there in 2002. It was viewed from outside the city as the sick city of Scotland - a place of deprivation and neglect. However the drama of the place struck me from the start with my first impression of the city being great awe and wonder. I felt this as the train snaked across the Tay rail bridge that curves over the estuary between the open countryside of Fife on South side and the city on the North. The city rises from the river and drags up to the Dundee Law. Now a kind of transformation in the form of a major regeneration project at the waterfront is now fully charging forward. This plan includes its own iconic museum, a new Victoria and Albert (V&A) - the only one outside London, which has recently opened to the public.

The city was for me more than just physically arresting, it was also where my walking and artistic endeavours began. These endeavours emerged from my involvement with the group/entity that was Dundee Artists in Residence (D-Air) and its various manifestations. My first encounter with D-AiR was an art reading group. The group looked at ecology and art, dialogical practices amongst other things, and was called ‘Reading Towards Action’. As the name suggests this was study or reading that lead to creation. Research and application. 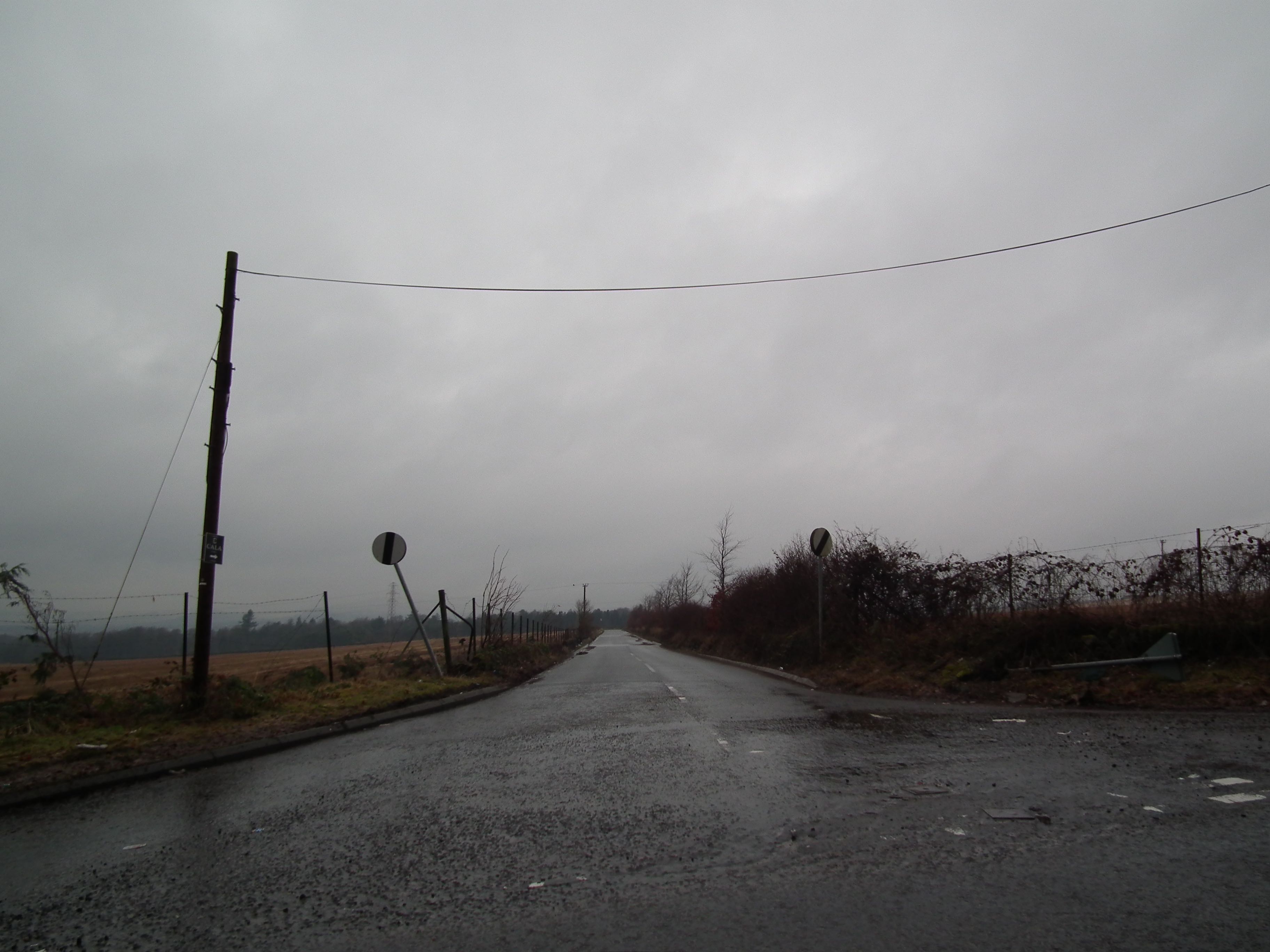 Day 1: The reality of the road

‘Boundary’ came from the text we were reading and debating and the project was my action. The complete walk was done in six days, walking two to four hours a day. No great trek then but rambles. It could have been done in one long day, but I stuck to the limits of my physicality and also because I wrote each trip ‘up’ each small walk required quite a bit of processing (the accounts are still online here: http://blog.theaviary.net/search/label/Boundary). On some walks I was accompanied while others I was alone. I started with the idea of walking on the political boundary, but I allowed myself to wander both physically and mentally, turning the walk into a drift, a type of dérive with a purpose.

Something we read in the reading group was the paper 'Geography, Experience, and Imagination: Towards a Geographical Epistemology' by David Lowenthal (3). Lowenthal describes the geographer as 'catholic and many sided' and that 'anyone who inspects the world around them is in some measure a geographer’. I wanted to look in some ways to create an analysis of my findings but equally find ‘Personal Geography’. Lowenthal quotes John K. Wright saying ‘the entire earth (is) an immense patchwork of miniature terrae incognitae’. In some ways I wanted to lay out a map of my own terra incognita. 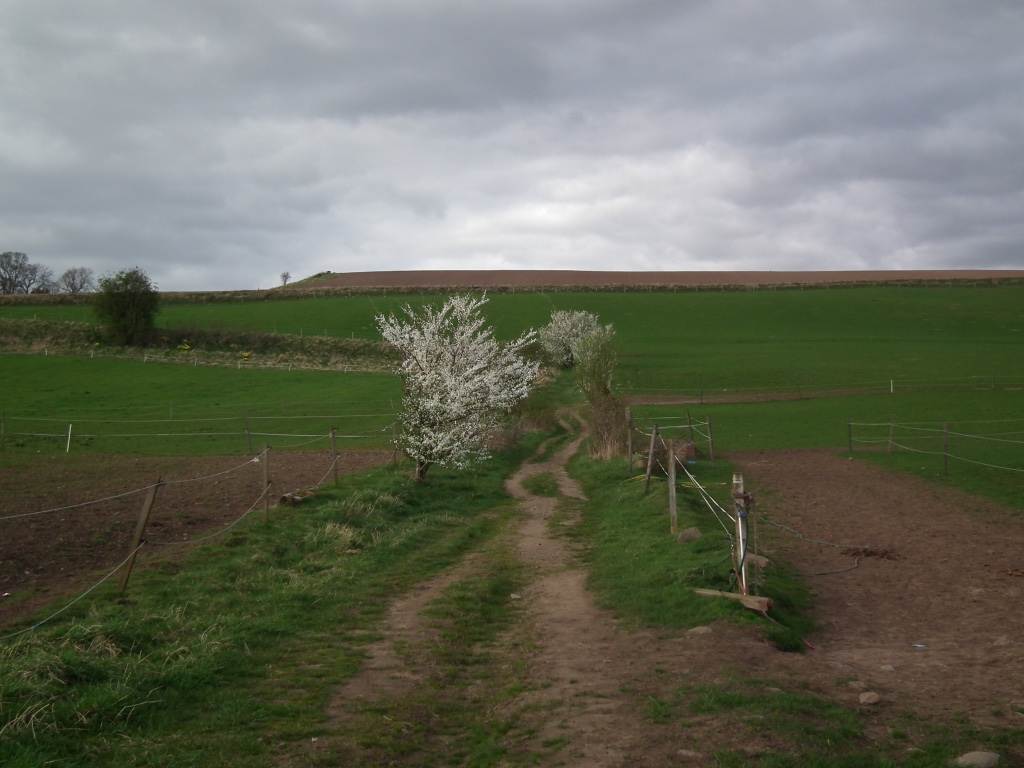 The Nature of the Walks

The terrain and landscapes I walked were varied.  From housing estates to open countryside, from motorway to country track. One of the walks followed the meanders of the Dighty Burn, the water boundary in the North of the city. I learned from this the importance of opening up these sites. This came to me as some of the walk was on private land and difficult to navigate while others were on maintained paths.  Such connection with the natural should be open it seemed to me. Such an essential part of city living, the not built part, the organic. The walk also included a lot of edge walks in farmed fields.  Walking tightly up against crops made me feel like I was walking in a kind of ‘Unbuilt Industry’ - a place of production, but lifeless. So little diversity within expanses of growing. On the other hand parts of the walk were within fragments of woodland and scrubland.  These chinks of life felt like refuges.

Within one I came across a burn (stream), which after a long hard week I called ‘The Stream in Which All the Brooding of the Week would be Washed Away’. This leads me to the idea of mythologising and naming. Both were part of my response to the areas I went through. As if the personal and subjective could be elevated in a way to a universal narrative.  Another site was called ‘The Temple of Industry’, this grand title was merely the modest remnants of what I presumed had been a mill or building associated with that industry. A burnt out car and shed was named ‘The Site of Sacrifice’, again myth making using naming and the creation from a real world a kind of paracosm - a kind of detailed imaginary world. However in this paracosm things were half truths and half explained. 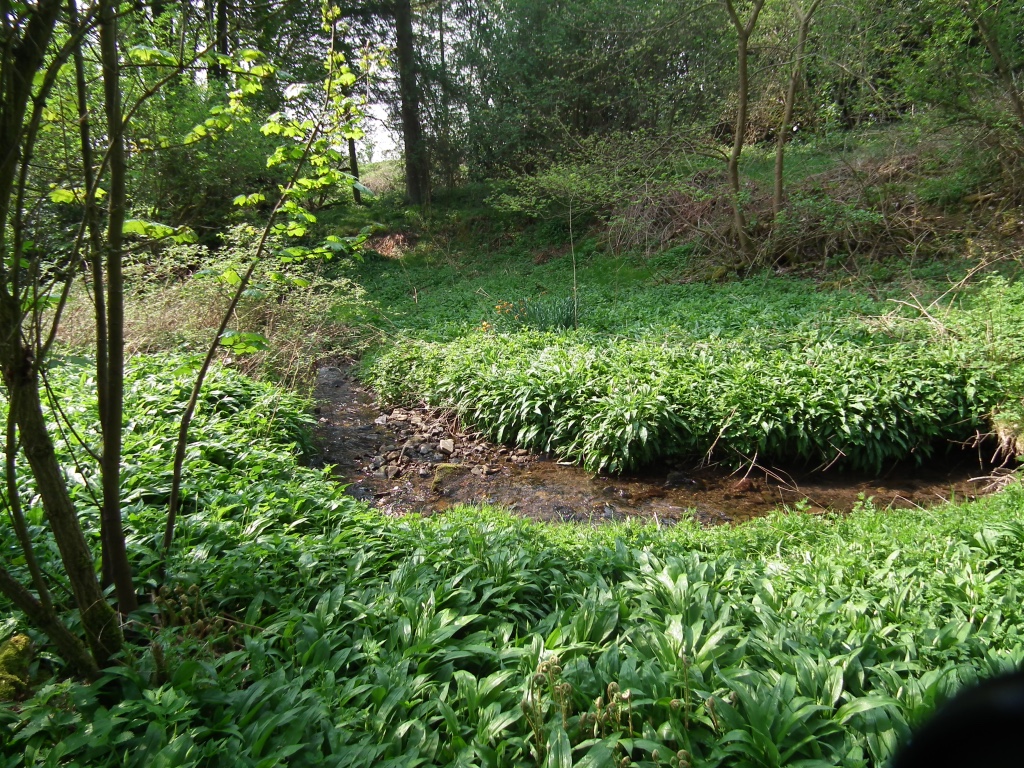 The Stream in Which All the Brooding of the Week would be Washed Away’ where I sat amongst the rising smell of wild garlic and went creature prospecting in the water.

It seemed as if the naming created the places, in a narrative within the narrative of my blog posts. The walk seemed to allow the working out and creating of ideas, like the naming. It was as if the physical act of walking, one foot in front of the other, allowed my mind some time off to get on with the process of working. Or as if a physical walking flow led to mental streaming.

On my final walk I asked members of the reading group to accompany me. In the end there was only one reader that became walker. This walker was Jonathan Baxter, the initiator, organiser, and provocateur of D-AiR and the Reading Towards Action group. That day the rain was heavy and persistent. I felt a responsibility for my walking companion, but he was wonderfully, joyfully equipped for the walk with tweed jacket and enormous red and white umbrella.  He was a sight, a great sight to behold. Having Jonathan made the walk more of an external dialogue than an internal one. He made a perfect walking companion willing to explore any physical or mental terrain.

I felt excited and transformed by our rain sodden walk. We eventually ended the walk at the beach at Broughty Ferry, a village that has come subsumed into Dundee. I walked out into the sea to wash my feet and as symbol that I had reached the end of my boundary. I knew then that this is not the last walk and not the last boundary travelled.

Afterword:  Sharing of the Walk

My translation and transcription of the experience was undertaken using methods mostly learned or known through my work as a landscape architect. So there were maps, drawings, report writing and so on. I also made a kind of film using PowerPoint - again using my working life for artistic purposes. In this way I felt I was in a way appropriating these tools. These elements were exhibited in an exhibition entitled Mappa Mundi, which itself was part of a citywide festival. Many unusual venues were used for the exhibition including the public library where the reading group had taken place. To cross boundaries further I undertook a short meditative performance. The idea and execution were straight forward. Taking as a starting point the difficulty in walking farmed lands, I walked between thumbtacks on a circular carpet. The concentration required brought to me the idea of the walk. 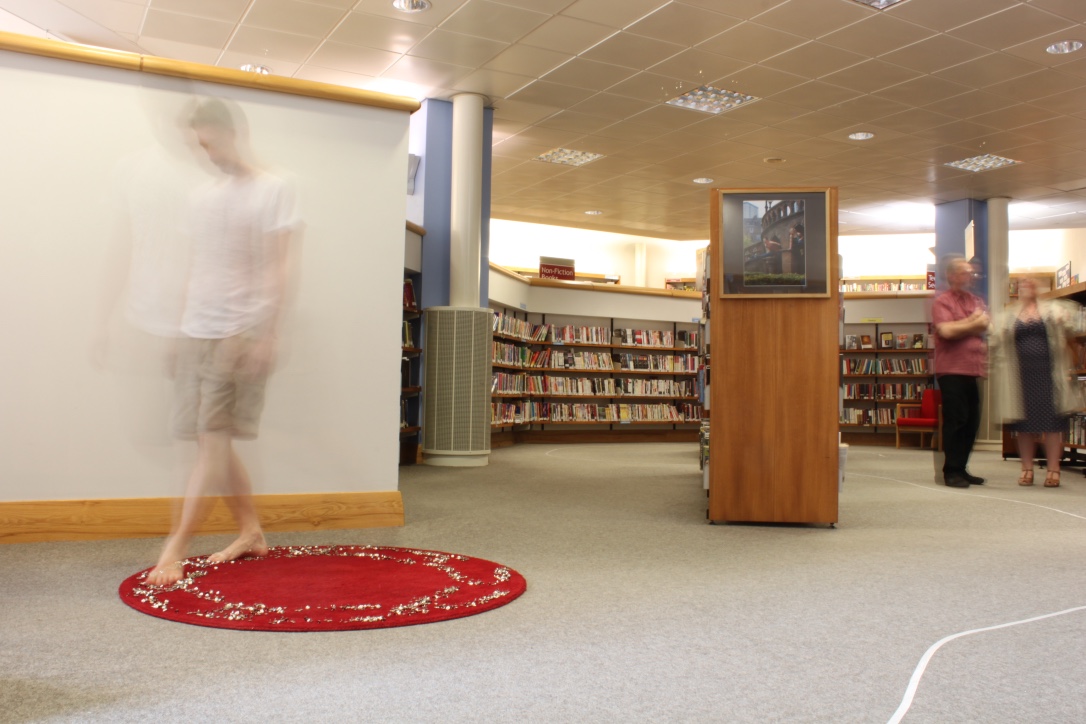 Re-enacting the walk on the 500mm of Unmade Ground.  Photograph Alistair Wilson.

As stated the walk described was a way of connecting with place, my place, my city.  It was also a personal journey to find out how I could approach the experience of landscape. Truth be known it was merely a starting point, the emergence of ideas. For me the walk was the artwork as much as the created material.  However together they began a different way of working for me, which has continued and developed.

There is a greater reason for the walks it is a part of the act of becoming and as Tania Bruguera has said “Aesthetics has shifted from the craft that’s required for the transformation of objects....into the requirement for the craft to transform ourselves (as a single person or as a group)”.(4) I see Boundary as part of my own transformation. There is something about the activity of walking which changes the walker. I found this on walks in the hills and on these Boundary excursions. Pieces of puzzles fall into place with the even pace of footsteps. A pilgrimage is a walk where the spirit is transformed but all walks have a spiritual quality. Since this time I have become an educator and hope to now move the process to inspire others through creative education practices. 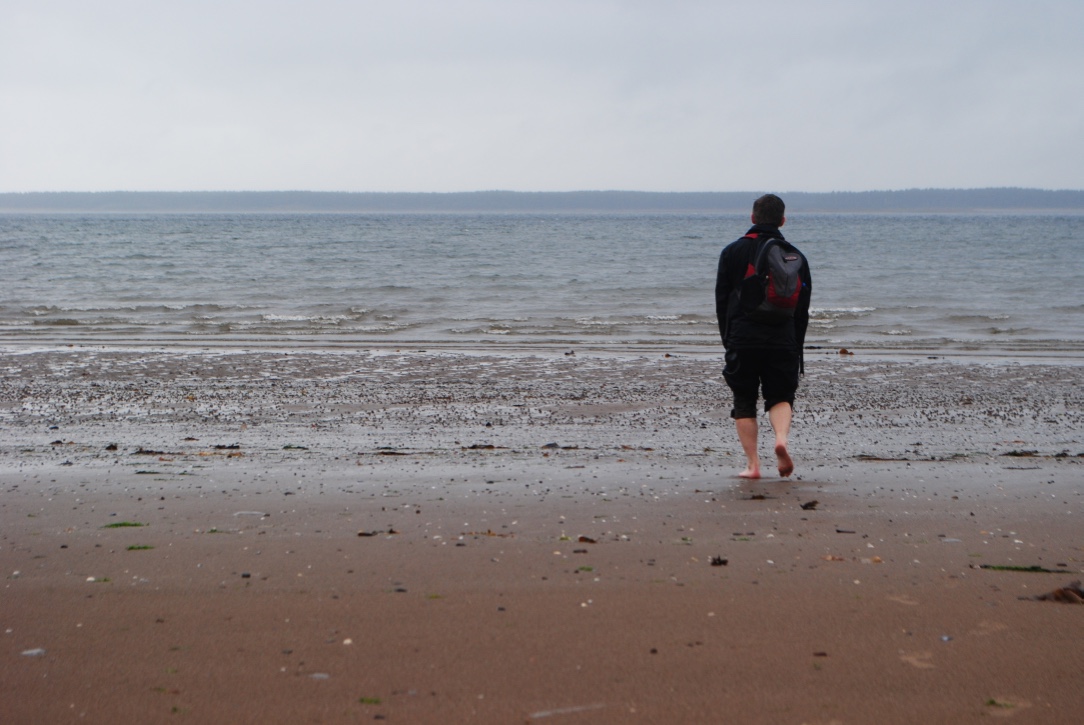 Gerard O’Brien, is a chartered landscape architect, who previously worked in the field for over a decade. He now lectures at Scotland’s Rural College in Garden and Greenspace Design. He is also a practicing artist and often uses walking as an artwork and starting point for art artefacts.

(3) Lowenthal, David. (1961) Geography, Experience, and Imagination: Towards a Geographical Epistemology.  Annals of the Association of American Geographers Vol 51, No.3.